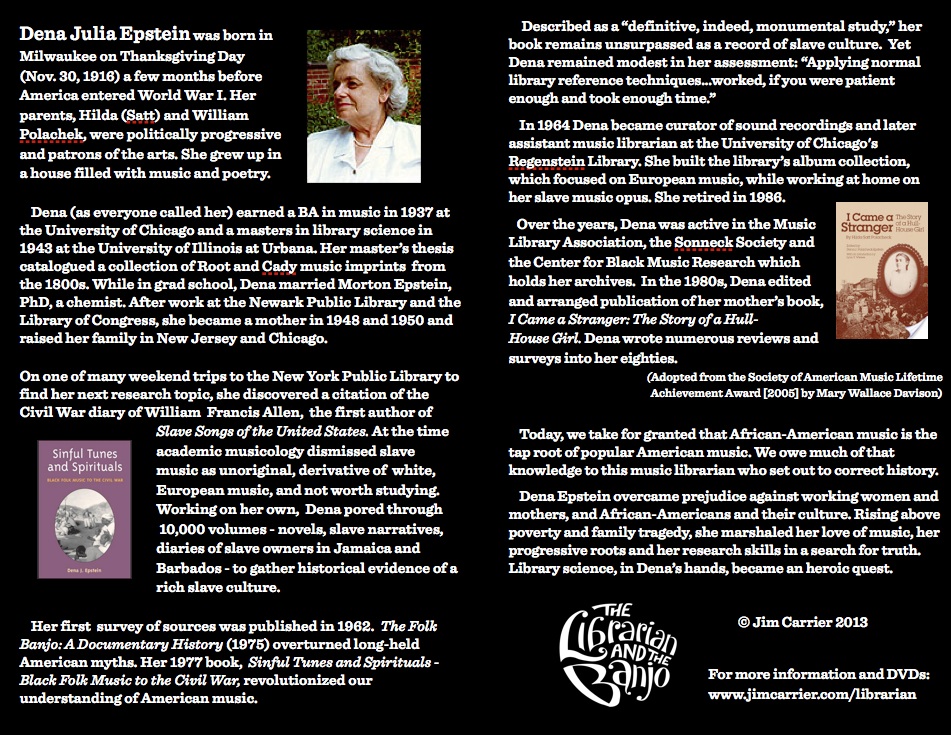 The 56-minute film tells the story of Dena Epstein, a music librarian, whose trailblazing scholarship was the first to take on the old myths about the banjo and prove its African-American origins and West African roots. Her work shattered myths about the roots of American music, and has been described as “monumental.”

The film features interviews with Dena (as everyone called her), academics, banjo historians and musicians including the Carolina Chocolate Drops, Bela Fleck, Tony Trischka and Eric Weissberg. The soundtrack, from dozens of banjo players, includes music on gourd akontings, minstrel instruments and bluegrass banjos. Among featured artists are Stephen Wade, Sule Greg Wilson and Pura Fe.

The DVD also includes bonus material on the minstrel banjo with Bob Winans; gourd banjo making with Pete Ross, Clarke Buehling and the late Scott Didlake; and Angela Wellman’s music school in Oakland, California where the banjo is being introduced to a new generation of children of color. In a bonus chapter I call “The Cutting Room” floor I have two great stories – the story of “Dixie,” and the Senagambian legend that the Devil likes akonting music — because akonting players were kidnapped by slave traders, told by Daniel Jatta.

The film also includes a pan of a huge (4-foot long) photo of the famous Tennessee Banjo Institute, held in 1992, at which Dena Epstein lectured. She recalls being one of the few people without a banjo in their hands. Here is a photo closeup of her behind John Hartford.

Dena’s work inspired the TBI, which brought together the whole world of banjoists, including, for the first time, African plucked lute players, minstrel historians and the hottest bluegrass pickers from Nashville. Many credit TBI with finally breaking the long-held American myth that the banjo was strictly a southern, white instrument.

Here is a link to the panoramic photo. When it opens, click to zoom in.

To read more about the film, including reviews, and watch a trailer, click on the drop down menu labeled The Librarian and The Banjo at the top menu above.

To purchase a DVD for personal or institutional use, click here.