The Librarian and The Banjo

The inspiring true story of music librarian Dena Epstein who labored 25 years to document the musical contributions of African slaves to the New World. Her work, now considered classic, shattered myths and stereotypes, proved that the banjo was a slave instrument, and sparked a remarkable revival of black string band music.

The film begins in the 1950s when Mrs. Epstein, an unemployed librarian with two young children at home in Linden, N.J., took a bus to th

e New York Public Library on Fifth Avenue in search of “something interesting to think about.” Quite by chance she discovered a forgotten abolitionist’s diary at the Wisconsin Historical Society. It contained  musical transcriptions of original slave songs sung by newly freed slaves in the Sea Islands of South Carolina. Among them were, “Michael Row The Boat Ashore” and “Roll, Jordan, Roll.”

At the time of Mrs. Epstein’s discovery, the prevailing wisdom in academia was that slaves had arrived in the U.S. “culturally naked,” that their music was derivative of “white” church music, and that African-American music was not worth studying. The daughter of a Hull House immigrant who had overcome pogroms, poverty and personal tragedy to raise four progressive and musical children, Dena, like her mother, brought an independent, stubborn streak to her research. Library science, in Dena’s hands, became an heroic quest.

Working from home, using her library skills, typed queries and interlibrary loans (this was before the Internet, Google, cheap Xerox copies and telephone calls), Mrs. Epstein painstakingly scanned 10,000 sources, gathering one anecdote at a time from such disparate sources as slave narratives, French travel accounts to the Caribbean and books on geology and botany.

By 1962 she had accumulated 100 examples of slave music; by 1975 she had accumulated 1,000 sources and published her master work, “Sinful Tunes and Spirituals: Slave Music to the Civil War,” a monumental contribution to American music history. The book established beyond doubt that African slaves created music and instruments that became the root of American music, including folk, country, blues, jazz and rock ’n’ roll. Her work legitimized the study of America’s biracial musical roots, and spawned new scholarship in the U.S., the Caribbean and Africa.

The 56-minute documentary takes us from the quiet of library stacks to the lively performances of string band music 300 years after slaves brought the instrument to the Americas. It documents current efforts to re-imagine and recreate the sound of ancestral gourd banjos and slave-playing styles that influenced today’s banjo playing. It also shows new generations of African Americans as they are introduced to the banjo.

Dozens of banjos are heard in the soundtrack: African gourd akontings, frailed minstrel instruments and Scruggs-style bluegrass banjos. The film features Grammy winners Bela Fleck, Eric Weissberg and the Carolina Chocolate Drops and has been hailed by banjo scholars, songsters and academics. 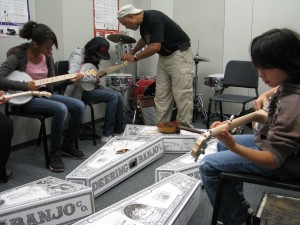 “An amazing tale…absolutely wonderful,” said Dom Flemons of the Carolina Chocolate Drops, a group that stars in the film with Mrs. Epstein.
“You captured Dena’s amazing life in a powerful portrait that is a tribute both to her and to the library profession,” wrote Bill Ferris, a southern scholar and former chair of the National Endowment for the Humanities.

For more information or to arrange screenings, contact the filmmaker, Jim Carrier:
jimcarrier@msn.com.