Dena Epstein, the famous music librarian who opened our eyes to African American musical culture, died Nov. 14 in Chicago. She was 96.

As her mother, Hilda Satt Polacheck wrote, “On the morning of Thanksgiving Day 1916, our second child was born, a dimpled girl whose eyes were as blue as gentians. We had much for which to be thankful.”

Indeed we all did. 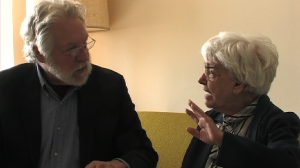 In the 1970s, after 25 years of research on her own, Dena published a series of papers and her monumental book, Sinful Tunes and Spirituals: Black Folks Music to the Civil War, which shattered myths that African slaves arrived in the Americas “culturally naked.” She documented a musical culture among Africans and African-Americans that was rich with song, dance and instrumentation.

I was fortunate to have interviewed Dena in 2009, and produced a film about her work. THE LIBRARIAN AND THE BANJO premiered in April 2013, and is now available on DVD. Click here to watch a trailer, and read  details.

A memorial for Dena will be held in Chicago at a future date.