SAILING IN A WHEATFIELD

The other day, on a sidewalk outside a thrift store in Madison, Wis., a framed poster propped against the window stopped me in my tracks. It showed a sailboat barreling toward me on a port tack – through a wheat field!
The price was $7.
“I hope you bought it,” laughed Buddy Melges, the venerable sailor, when I called him at his home in Lake Geneva. Melges, it turns out, was at the helm of the boat. 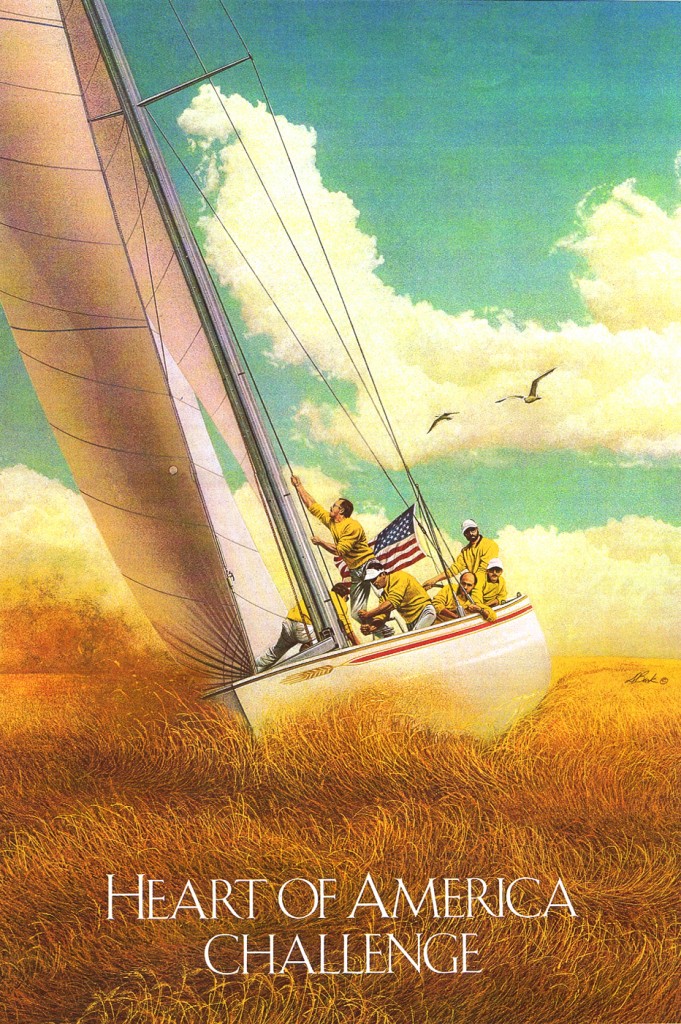 The artwork captured beautifully a remarkable and unique sailing adventure in U.S. history – a home-grown Midwestern attempt to win the America’s Cup.
In a year when billionaires battle for the cup with Star-War-ish flying machines on San Francisco Bay, the story of the 1987 “Heart of America Challenge” is a charming if melancholy tale of what sailing competitions used to be.
In 1983, after Australia wrested the cup from the U.S., indignant sailors all over the U.S. mounted campaigns to get it back. Gene Kinney of the Chicago Yacht Club asked Melges to lead an effort, one of seven from the U.S.
Harry Melges, famous for producing inland boats at his family plant in Zenda, Wis., relished challenging not only Australia but also the sailing establishment on both American coasts, who, he once said labeled him, “this hack from the Midwest.”
While lawyers somehow convinced a New York court that Lake Michigan was an “arm of the sea” and could serve as a defender’s turf should they win the cup, Melges pulled together shoestrings to gather a team and raise $6 million to build a new 12-meter boat and get to Australia.
“It was a little bit here, little bit there” Melges remembered. At one point the team was clearing $15,000 a week from T-shirts alone. The largest single gift, $1 million, came from the telephone company MCI Communications.
Leo Burnett, the Chicago advertising firm that created “Marlboro country,” and Pillsbury’s “nothing says lovin’ like something from the oven,” campaigns, came aboard. Art directors John Eding and Ted Bell soon came up with the idea of a sailboat in a wheat field, and hired Chicago illustrator David Beck to create it.
Beck spent a day in a chase boat on Lake Michigan taking pictures of the crew training on a borrowed yacht, and found the drama of tacking through blowing wheat. An original idea of a cove stripe pitchfork was changed to a wheat shaft.
At the yacht club unveiling, “it was like rock star applause – I’d never experienced anything like that,” Beck recalled.  Everyone loved it, with the exception of Gov. Jim Thompson who wanted the boat sailing in corn stalks, Illinois’ leading farm crop. Beck talked him out of it.
The poster was sold for $100, or $500 signed by Melges, skipper Gary Jobson and Beck. They went like hotcakes. Beck was never paid by Burnett, but sold two additional originals to corporate sponsor Ciba-Geigy, and for years received agriculture commissions.
“I did guys standing in wheat fields and corn fields and a plethora of crops,” he said by phone from Cincinnati where he is now a well-known illustrator.
Jobson, who left the campaign to broadcast the 1987 cup for ESPN, calls it the best America’s Cup poster ever done. The campaign was also one of a kind.
“Eight-seven was mostly an amateur contest,” he said. The boats were crewed by nationals, it was the last of the 12-meter yachts in the cup, there were still a couple of wood boats competing against aluminum and glass, and the money was chump change compared to today’s races. Melges went to Australia in 1986 with $3 million in cash and a contingent of 40 people.
“We did a lot of work with the crew, the old Midwestern way, from the ground up,” Melges said. “They were a bunch of kids. We went after guys that had structure, who could get on the handles.”
One who had that “structure” was Larry Mialik of Madison, a tight end for the University of Wisconsin who went on to play pro football. Melges had remembered a radio broadcast in which Mialik had caught a touchdown pass against Ohio State. He called him up.
“I grew up not knowing how to spell yacht,” said Mialik. “Buddy said, ‘meet me in Chicago tomorrow in front of the Chicago Tribune.’ And there was the Heart of America and the governor’s wife with the champagne and a bunch of guys in blue blazers. It was life changing.” Mialik, who earned $70 a week to grind for Melges, became a racing pro.
The 26th America’s Cup, broadcast live to the U.S. for the first time, left Heart of America 8th out of 13 challengers to take on Australia’s Kookaburra III. Jobson said the Midwesterners got better with every race. In the end they lacked $200,000 for a new main and jib for the final round-robin Luis Vuitton series.
“In the end we were one of the four fastest. We just didn’t have enough points,” said Melges, who is now 83. Dennis Connor, whose syndicate Sail America took three boats to Australia, came home with the cup.
Four years later, the world had changed. Melges won the cup for Bill Koch, with a  $62 million budget and staff of 240 people, including eight of his Heart of America crew.
Knowing Buddy’s penchant for colorful quotes, I asked his view of this year’s America’s Cup.
“Before, it was a slow moving program, what sailing was all about: tactics, defending your position, boat handling. It’s a drag race now. Pedal down and go like a raped ape.”